skip to main | skip to sidebar

Just got back into town after a couple of so-cal shows... San Diego was surprisingly great, and LA was predictably.... LA.

Unfortunately my phone was dead throughout our little trip, so I didn't get any pics or videos - sucks! We're headed up to Portland this week so hopefully I'll remember my charger this time and get some stuff.

The Bay Bridged included in this week's weekend mix, which was rather nice of them. Check it here.
Posted by Caleb at 4:42 PM
Labels: Guidance Counselor, The Bay Bridged

We're headed to LA tonight to play with our friends Dirt Dress at the Silver Factory Studios.
Tomorrow night finds us in San Diego w/ Manuok at the Tin Can Ale House, and Saturday we're home in Oakland at the Uptown with Guidance Counselor and the Super Cutes.

The Bay Bridged has it all here.
Posted by Caleb at 11:51 AM

This is the Nightgowns - Grand Lake's new favorite band. They hail from Tacoma, Washington, and we happened to be sharing a bill at Old Ironsides in Sacramento the other night. Their set was totally perfect and floored the three of us. Great songs, interesting things happening sonically, and the delightful antics of lead singer Trevor Dickson both on and off stage combined to make the Nightgowns the best band ever. According to us.

Check out their MySpace.
Get their album 'Sing Something' on iTunes. Listen to them on Last.fm.

God we love them.
.
Watch this:

In other news, we're in LA this Thursday, San Diego this Friday, and Oakland this Saturday, with some other awesome bands. MySpace has the deets.
Posted by Caleb at 11:10 PM

I was out of Oakland for about two weeks. The night that I got back and moved into my new place on Filbert and 27th, the Oakland PD gave me a ring and informed me that they had indeed found our stolen van, Lucy. After two and a half months. Unreal.

She was abandoned apparently by whoever had stolen her, around E. 22nd and 17th - not all that far from where I've been living since last October. Miraculously, she still runs, and only suffered minor damage - the rear-view mirror has fallen off, the speakers are gone (but the stereo is still intact), some light fixtures are busted and the power steering fluid has been drained (strange, right?). All in all though, she's pretty much her old self. I can hardly believe it.

After a coordinated rescue effort (I had to ring Dylan from Man/Miracle to help me get it, and Jameson had to come from the City cause he had the keys) we found evidence that suggests that someone had been living inside of Lucy for the last little while. Of course everything that I had left inside was gone, replaced by a curious set of tools, a pair of women's high-heeled boots, an empty suitcase, a busted lock-box from an armored car company, some suspicious looking rags, and some old spoons. Yikes.

Lucy isn't quite ready for a long trip at the moment, so we are still not playing the Washington dates that we canceled earlier - but she should be up and running in the near future. We are indescribably happy that she's back.

In other news, we scored a nice shout out about our tour and free live single from Hippies Are Dead. Check that out here.

Our little end-of-summer jaunt begins this Saturday in Sacramento, when we play Old Ironsides with Buildings Breeding. If you haven't already, make sure you download our free live tracks by visiting us on bandcamp.
Posted by Caleb at 11:40 AM

Washington will have to wait

We are again very not pleased to announce that we have had to cancel two of our tour dates, due to lack of Van. As you may recall, our van was stolen a little while back, leaving us without adequate means to transport ourselves long distances.

We are still playing all of our shows in California, and we're even making it up to Portland - but Seattle and Olympia are just a little too far without Lucy.

Sorry about that, and thanks for understanding.

The dates we are cancelling:

Sorry Washington, State of my birth - we'll do it again some other time.
Posted by Caleb at 1:59 PM

We are happy to announce our end of summer West Coast Tour! 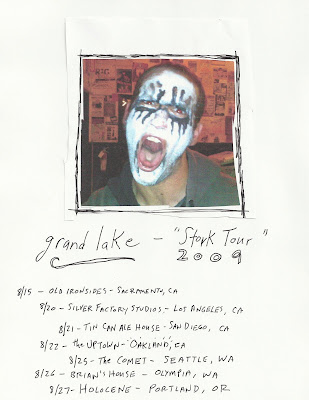 In celebration of this we are offering anyone who wants it a FREE DOWNLOAD of TWO NEW TRACKS via bandcamp.com.

Hit up the above widget or just head here to download the tracks.

Our tour has stops in Sacramento, Los Angeles, San Diego, Oakland, Seattle, Olympia, and Portland. We're totally excited and can't wait to see you at one of these shows!

I took a little time off from blog town, which my next post will describe a little more closely. But now we're back, with the latest in Grand Lake news.

A week or so ago we played a couple shows, and capped off a busy week with an epic recording session - 8pm to 5am with our friend Jeff. We're working on our debut full-length, tentatively titled "Boontling". The idea with this one is live and raw, which is probably a complete 180 from our last two studio releases. We'll keep you posted. We hope to have some new tracks for you by the end of the year.

While I was away, the Deli SF posted this little review of the below mentioned show. With the following video of a newer song "Louise":